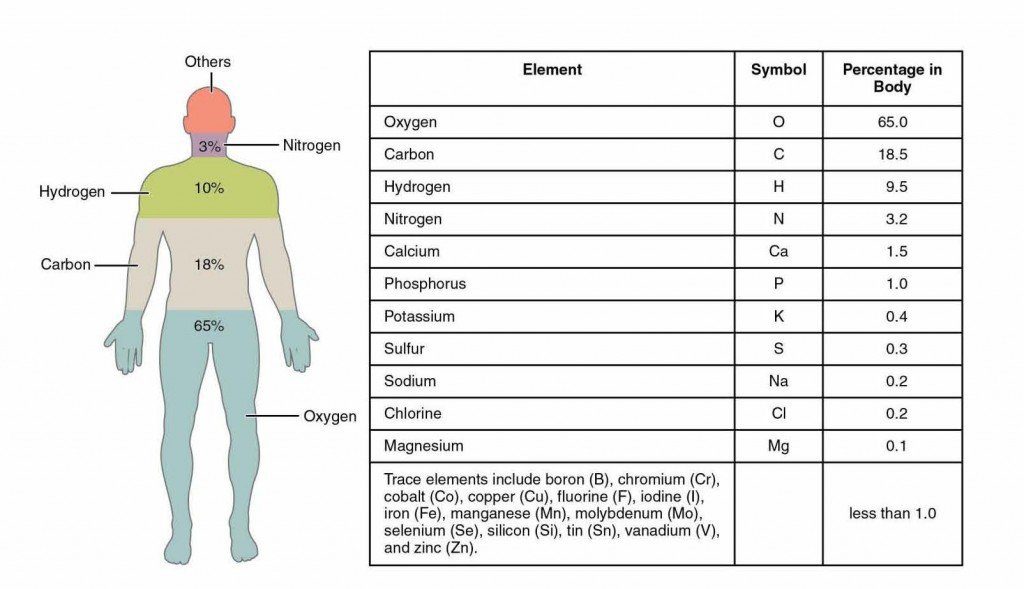 There are certain realizations that wig me out every so often. Join me here and see what you think.

Imagine you are surfing the web for a recipe…maybe on “Epicurious” … and you come upon the chart above. It diagrams very neatly for us the recipe of basic elements our bodies are made of. As you can see, we are made primarily of oxygen, carbon and hydrogen, with dashes of several other elements and a pinch of around a dozen trace elements. Here are a couple of thoughts about this that really spin my wheels.
First, it fascinates me that these are the same elements that make up earth, stars, oceans, elephants and spiders, seashells, rocks and trees. All creation is made up of varying combinations of what we see on the periodic table. Amazingly versatile, handy and very creative, yes? I find the thought that I contain the stuff of stars to be compelling and quite romantic, except for maybe the part about “hot gas”. Here is a tidbit about what stars are made of:

“Stars are made of very hot gas. This gas is mostly hydrogen and helium, which are the two lightest elements. Stars shine by burning hydrogen into helium in their cores, and later in their lives create heavier elements. Most stars have small amounts of heavier elements like carbon, nitrogen, oxygen and iron, which were created by stars that existed before them. After a star runs out of fuel, it ejects much of its material back into space. New stars are formed from this material. So the material in stars is recycled.”
Cool Cosmos/Caltech
We don’t seem to contain helium, which is a very smart move on God’s part I must say…can you see us all tethered to earth by strings? If I fell into a black hole, would I emerge talking like Donald Duck?

I imagine God standing behind His granite countertop with His collection of elements spread out before Him in those nifty little glass bowls the folks on the cooking shows use. But not even Rachael Ray could take all these elements and combine them in such a way that they would come out of the oven with the same form and function that God has baked into the universe. Thus, my second wig out rush:

Our Creator takes a handful of elements that, if sold in a baggie on a young scientist home chemistry website, would cost about a buck. He then tosses in breath, life force, vibration, emotions, senses, thought, instinct, intuition and chemical reactions that produce the ever moving, ever morphing, unfolding state which we call 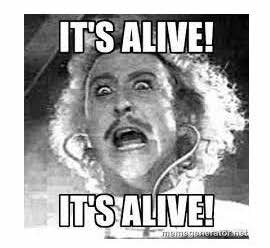 I wonder if God said this when the first person began to stir… moving fingers and toes. Think about it…One minute, we are an unassuming pile of dust, the next thing you know, God’s Spirit breathes animation into every cell, organ, body system and spirit and we become loving, hating, opinionated, learning, developing, walking around, creating, praying, working, playing, thinking, sleeping, digesting, eliminating, procreating, leaping, dancing, sensing BEINGS. We are so strong, yet so fragile. We have such a huge impact on one another, yet we are dust. I find myself in restaurants and the grocery store…the post office…observing the manifestation of life force in other humans…I watch bare trees in winter and think of the hidden life going on inside…imagine myself underground as sprouting seeds burst …I saw myself floating alongside my grandson as he was being “knitted together” in my daughter’s womb. It is all crazy astounding.

But I know I can’t really grasp it in all of its fullness. So how do I settle into this wigged out awareness? Instead of grasping, it seems to work best to quiet myself and blur the edges between me and “other”. I become gently aware of the spaces between my cells where the hum of being alive breathes. It is a delicious process…won’t you join me in this feast?

Please…take a moment. Look down at the living, breathing, perfectly knit together body which carries YOU and God inside every cell. However imperfect you may perceive yourself to be in this moment… No matter what alterations life may have made in form or function … you are incomprehensibly valuable, astounding and all of those other words that can’t possibly describe the wonder of life on this planet, in this galaxy, in this universe. Your heart is God’s dwelling place. Your body, His temple.

And most of all, God made you and looked at you and said, “Oh my…we are GOOD”.

You and the universe were made by LOVE’s recipe.
Feel your breath…
Watch and feel whatever moving parts you have, move…
Taste, smell….
Reach down and feel your limbs, face, skull…
Miraculous…
Mystery…
Beloved of the Earth and Heaven…
Yep, it wigs me out sometimes, just to know that I am…
ALIVE!!

Genesis 2: 7
7 Then the Lord God formed a man[c from the dust of the ground and breathed into his nostrils the breath of life, and the man became a living being.

Psalm 8
Revised Standard Version (RSV)Divine Majesty and Human Dignity
To the choirmaster: according to The Gittith. A Psalm of David.

>8 O Lord, our Lord, how majestic is thy name in all the earth!
Thou whose glory above the heavens is chanted
2  by the mouth of babes and infants, thou hast founded a bulwark because of thy foes,  to still the enemy and the avenger.
3  When I look at thy heavens, the work of thy fingers, the moon and the stars which thou hast established;
4  what is man that thou art mindful of him,  and the son of man that thou dost care for him?
5  Yet thou hast made him little less than God, and dost crown him with glory and honor.
6  Thou hast given him dominion over the works of thy hands;  thou hast put all things under his feet,
7  all sheep and oxen,  and also the beasts of the field,
8  the birds of the air, and the fish of the sea,  whatever passes along the paths of the sea.
9  O Lord, our Lord,  how majestic is thy name in all the earth!
Revised Standard Version (RSV)

Psalm 139
Revised Standard Version (RSV)
To the choirmaster. A Psalm of David.

13 For thou didst form my inward parts,  thou didst knit me together in my mother’s womb.
14 I praise thee, for thou art fearful and wonderful.[a]
Wonderful are thy works! Thou knowest me right well;
15 my frame was not hidden from thee, when I was being made in secret, intricately wrought in the depths of the earth.
16 Thy eyes beheld my unformed substance;  in thy book were written, every one of them, the days that were formed for me,  when as yet there was none of them. 17 How precious to me are thy thoughts, O God! How vast is the sum of them! 18 If I would count them, they are more than the sand.  When I awake, I am still with thee.[b]

37 The hand of the Lord was on me, and he brought me out by the Spirit of the Lord and set me in the middle of a valley; it was full of bones. 2 He led me back and forth among them, and I saw a great many bones on the floor of the valley, bones that were very dry. 3 He asked me, “Son of man, can these bones live?”

I said, “Sovereign Lord, you alone know.”
4 Then he said to me, “Prophesy to these bones and say to them, ‘Dry bones, hear the word of the Lord! 5 This is what the Sovereign Lord says to these bones: I will make breath[a] enter you, and you will come to life. 6 I will attach tendons to you and make flesh come upon you and cover you with skin; I will put breath in you, and you will come to life. Then you will know that I am the Lord.’”
7 So I prophesied as I was commanded. And as I was prophesying, there was a noise, a rattling sound, and the bones came together, bone to bone. 8 I looked, and tendons and flesh appeared on them and skin covered them, but there was no breath in them.
9 Then he said to me, “Prophesy to the breath; prophesy, son of man, and say to it, ‘This is what the Sovereign Lord says: Come, breath, from the four windsand breathe into these slain, that they may live.’” 10 So I prophesied as he commanded me, and breath entered them; they came to life and stood up on their feet—a vast army.